Views on Cosmology and Physics

Albert Einstein published a paper on the Photoelectric effect in 1905.

For brevity, I will call Einstein's Photoelectric paper, PEP

I once heard a podcast claiming PEP was just the work of Max Planck who had not yet published his work.

When Einstein published PEP, then Einstein was given the credit for Planck's work and conclusions.

This book considers whether Planck or Einstein should get the blame for a problem in Planck's constant.

After the 1905 paper's conclusions were accepted by the physics community, the consequences include:

1) changes to to our understanding of light, as defined by James Clerk Maxwell,  and

2) defined  a photon which became an important quasi-particle for the new science which began in the 1920's,  quantum mechanics.

In his PEP, Einstein reported the experiments and results by Max Planck.

An important  result was a constant defining the relationship between energy and a wavelength of light.

This is usually called Planck's constant, because Planck defined its value, from his experimental data.

PEP justified the definition of a massless, quasi-particle, called the photon.

Planck did the work with experiments to gather data to enable a conclusion.

Einstein adapted Planck's work (though specific changes are not clear and Einstein published the paper and its conclusion.

According to Wikipedia, the Planck formula, or the Planck's energy–frequency relation, is now called the Planck-Einstein relation.

For simplicity in my book's  title, here I assigned the blame to Einstein for the problems resulting from the conclusion after the experiment.

I know Planck might had the equation in about 1900, as identified in the Prelude.

Planck's equation is the main concern when reviewing PEP.

In the end, Einstein got most of the credit  for its formula and conclusion, by publishing PEP, which earned the 1921 Nobel Prize in Physics.

There  are several concerns with PEP.  The acceptance of the conclusions in PEP had consequences.

The origin and validity of a photon are reviewed.

The photon story is described in 5 sections, I will bold their lines.

2 Einstein's 1905 paper on the photoelectric effect,

3 My Critique of PEP

Here is the description of the photoelectric effect.

The experimental results instead show that electrons are dislodged only when the light exceeds a certain frequency— regardless of the light's intensity or duration of exposure.  reference 1:


Here is a simple description.

The ejection of an electron does not occur until a specific frequency of light hits the target.

No ejection occurs with light having a lower frequency, regardless of intensity or duration.

The conclusion is that light comes in increments defined by the measured threshold for an electron to be ejected..

There were several, notable discoveries about the nature of light before 1905.

I begin with the discovery of Fraunhofer lines, roughly a century before the 1905 paper.

Light, like from the Sun, was known to be a continuum of wavelengths.

Here is an image showing that continuum, from Reference 2.

Visible light exhibits no quantum increments, in the visible spectrum.

When observing a rainbow, the colors smoothly transition from color to color, with no gaps to reveal increments. A prism reveals the same continuum of light.

The dark lines in the solar spectrum were noted first in 1802.
In 1814, Joseph von Fraunhofer independently discovered these lines. He went on to identify  over 570 lines.

These lines reveal that a specific element absorbs a specific wavelength from the  continuum of wavelengths in the solar spectrum.

In the photoelectric effect,  a specific element ejects an electron on a specific wavelength.

The wavelength being absorbed depends on the particular element on the surface of the target,

The light is a continuum, of wavelengths, so the quantized behavior must be in the atom of this element, not in the light.

By 1900, or before PEP was published in 1905, Max Planck had already proposed Planck's postulate. on quantized light,

According to the reference, Einstein adapted Planck's postulate into PEP. Certain headings in PEP suggest where these changes are in the PEP.
These headings are identified in the critique.

A link to an English translation at a Harvard archive is provided.

On a Heuristic Viewpoint Concerning the Production and Transformation of Light

Section 3) My Critique of PEP

Here is an observation IN pep.

excerpt 1  is Heading 1 (to find it when noted below)

PEP has a heading of "A certain problem concerning the theory of "black body radiation."

Without much analysis of his equations,  Einstein seems to be changing  the distribution of  energy in black-body  radiation for his false photon.

My remark to Einstein's change after Heading 1 is:

I see no justification to change the energy to frequency defined by the Rayleigh-Jeans law to conform to Einstein's formula, but the false photon was a wavelength

Instead, I expect a foumula involving a frequency, like this one must be changed to conform to Lori Gardi's fix for a mistake with frequency in section 4.

excerpt 2 called Heading 2  (to find it)

Planck's Derivation of the Fundamental Quantum

Here is an excerpt after Heading 2.

This brings us to the conclusion: the larger the energy density and the wavelength of radiation the more suitable the theoretical basis that we used; but for small wavelengths and low radiation densities the basis fails completely.

Here is my observation.

I cannot know whether "energy density" is a reference to the amplitude of the wavelength.

This paragraph is confusing when words are repeated, without knowing if the context of each use is different than could be suggested.

"the theoretical basis that we used; but for small wavelengths and low radiation densities the basis fails completely."

Here is my interpretation of that line.

Thie word basis is repeated, suggesting "basis we used" but for ... " the basis fails completely" are the same.

When dropping "but for" in the middle, the remainder implies that Einstein's theoretical basis fails completely, except for "small wavelengths and low radiation," so his basis fails under specific conditions.

That interpretation must mean that under those specific conditions, Einstein's basis fails and must be ignored.

That conclusion, after an adjustment flipping the text around the dropping of the middle "but for" from a single, important sentence, is remarkable.

A simple description of the photoelectric effect was given in section Prelude.

Here is it again, but using instead a baby being fed with a bottle having either mother's milk or a mixed baby formula.

This is starting with a hungry baby each time, for the next feeding.

When starting with the bottle nearly horizontal, the flow from the bottle  is weak, so the baby can drink any type of liquid slowly, with no spilling around the mouth.

The spilling does not occur until a a specific amount of liquid is in the baby's mouth (i.e., a mouthful),  and more won't fit, until a swallow.

This specific amount was not affected by the amount of liquid in the bottle.

No spilling occurs with a different amount in the bottle, or with changing the bottle's tilt to increase the flow. so the same threshold occurs regardless of tilt.

The conclusion could be that the liquid in the bottle comes in increments defined by the threshold, which was one mouthful of this baby..

I expect that anyone ever feeding a baby from a bottle starting with a variable amount of liquid in the bottle each time, will absolutely NOT conclude the liquid in the bottle comes out, to this baby, only at a constant increment of only, exactly, one mouthful at a time.

Lori Gardi's revelation of the bug (her term for a mistake) in Planck's constant is extremely important in this story of a photon.
She also mentions some of the consequences of the bug in quantum mechanics..

Any equation in physics using h, or Planck's constant, must be fixed, to match the new units of h, after the fix of the bug, to this important constant is accepted by the physics community

Among them are a change to the uncertainty principle in quantum mechanics, where a mathematical inequality used h.

In my prelude, I noted that many physicists had had worked with light having a continuum of wavelengths. None observed light as many incremental dots of color, or quanta.

Only this particular experiments detected a behavior with electrons driven from the atom, leading to the publication of PEP.

Apparently no one compared PEP with known Fraunhofer lines, which should have been known by many, to question the validity of PEP.

His rejection of PEP would have been noticed by others, to prevent its negative impact on physics.

After telling the baby bottle story, the quantized behavior of light in this experiment is just not believable.

The old photon is  a generic, versatile particle/wave..

QM has only particles. This wavelength is not a particle.

Einstein's false photon enabled QM to apply it for different internal behaviors,  like for electromagnetism.

Quantum Mechanics must change its invalid photon to apply the correct behavior of light as a specific wavelength having a specific intensity.

Lori Gardi discovered that there is a mistake in Planck's equation, because the units are wrong in Planck's constant.

She published a paper and produced an excellent YouTube video.

Planck's Constant and the Nature of Light

The video is well-done, and makes a convincing case.

The critical observation fix involves h, or Planck's constant in the energy equation of E = hf.

The equation must be fixed to use wavelength, replacing frequency.

If frequency is used, then the time of measurement must be in the equation, bit it's not.

Before the fix, the energy was thought to be carried in the frequency, regardless of intensity.

After the fix to Planck's constant,  energy in light  is carried by the intensity of each wavelength.

This simple description of this conclusion even sounds correct to me.

I recommend spending the few minutes to 1) learn of her method of analyzing the completeness (her word) of equations,  learn how she justifies there s no quasi-particle like a photon..

Planck's Equation and Planck's constant are the foundation of our understanding of the amount of energy carried in light.

As defined by James Clerk Maxwell, light is always a wave, never a particle.

The energy in light is carried by the intensity of each wavelength in the continuum.
The span of wavelengths depends on the light source. Stars emit thermal radiation. A medium star like the Sun emits the span from ultraviolet to infrared. A cooler star like a red giant emits  from the color red to infrared.

The solar spectrrum is shown below.

That statement in bold does not agree with Einstein's assumed packets of energy. Light does not exist except as a continuum of wavelengths

An atom's emission line is a continuum of only a single wavelength, with its intensity driven by the atom.

The simple statement is almost intuitive when looking at the energy distribution by wavelength in thermal or black-body radiation.

Light is a continuum of wavelengths. The intensity of each wavelength determines the total energy being carried by the continuum.

A long time ago, Wikipedia had this figure for the solar spectrum. It has since been replaced by new figures.
This image is simple and clear, unlike the others. 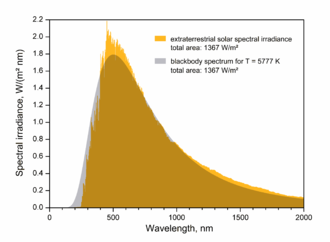 Someone familiar with the continuum of wavelenghths,  which make up black-body radiation being seen in this figure, will not see quantized increments  of either wavelength or intensity.

There is no photon.